There are five types of turtles in Costa Rica, the Hawksbill, Green, Leatherback and Olive Ridley.

While some turtles in Costa Rica can be found nesting throughout the year, the largest concentrations of each type occur as follows:

Olive Ridley - Pacific Coast with the highest numbers being present between May and November with September and October being the peak months.

Hawksbills - Golfo Dulce on the Southern Pacific coast in September and October. 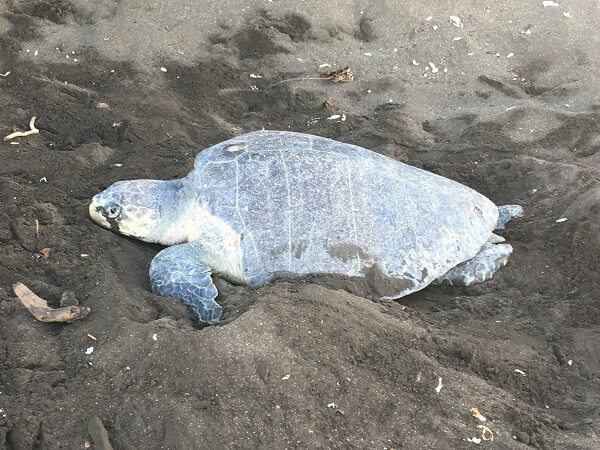 The must abundant type of turtles in Costa Rica are the Olive Ridley turtles.  While you may find them throughout the year on the Pacific coast, most arrive between May and October during the rainy season.  During September and October there will be what locals call the "arribada" (the arrival), where thousands of turtles show up all at once to lay their eggs.  The arribada may only last 1 or 2  days, and other than being close to the full moon, the exact timing is never exactly known.  Example, we arrived one morning at 6am to see the Olive Ridley turtles laying eggs.  The afternoon before there were thousands during arribada, the morning we arrived just a few hundred.  Still spectacular, but very unpredictable.

45 days after the eggs are laid, the  babies hatch and make their journey to the ocean.

The best place to see the Olive Ridley turtles in Costa Rica in mass numbers is in Ostional on the central Pacific coast.

How to get to Ostional

While you may think that 40 miles or so will only take about 45 minutes, remember, this is Costa Rica, where nothing is fast.  See our Driving in Costa Rica page.

If you are driving, or taking a tour, from Flamingo or Tamarindo, more than two thirds of the trip is on dirt roads.  Four wheel drive is an absolute requirement during rainy season.  During dry season the road is usually graded and not too bad, however still slow.  Four wheel drive is still recommended.

In rainy season, which is the best time to see the Olive Ridley turtles in Costa Rica, the drive can be a really long haul.  There are several narrow bridges, roads with mud and large potholes and a river with a bypass bridge that can become completely impassable if the rains are heavy.  Plan accordingly and watch the weather carefully.  It is entirely possible that you could reach Ostional and not be able to get back due to the heavy rains that occur in September and October and sometimes other months of the year.

For our first trip, the 45 miles journey took 3.5 hours.  The second trip took 2.5 hours because it was dry and the road had been graded since our first journey.

Other options include flying into the small airport of Nosara, spending the night and then hiring one of several tour companies to take you to Ostional via a 4 wheel drive vehicle.  Usually the tour company will include the National Refuge entry fee into their fee.

In 1984 Costa Rica formed the Ostional National Refuge Center.  The purpose was to protect the Olive Ridley turtles in Costa Rica and other wildlife in the area such as birds. 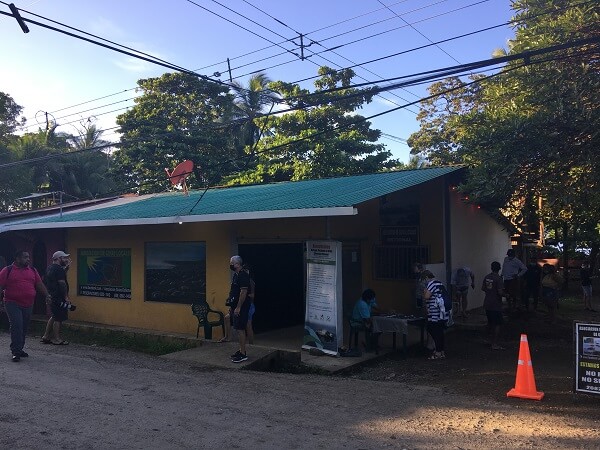 Prior to the formation of the Wildlife Refuge, there were no limits on how many turtle eggs could be harvested and sold.  As a result, the population of turtles in Costa Rica, especially the Olive Ridley species, started to dwindle.

The National Wildlife Refuge Center now controls access but does allow for a fixed number of eggs to still be harvested for consumption and sale in order to support the local people and economy.  Those who harvest eggs must check in, are given a blue shirt to identify them and a bag that limits the number of eggs. 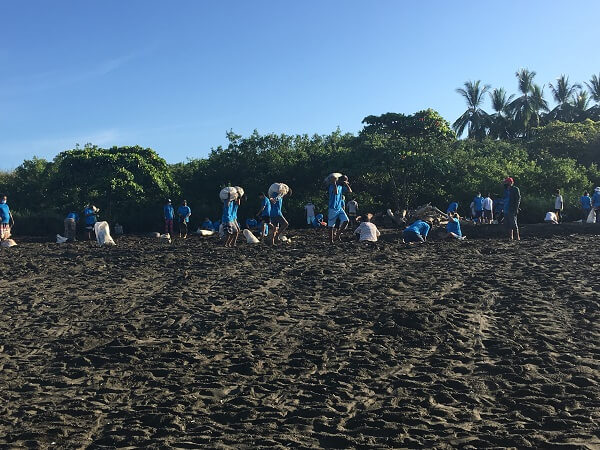 When the turtles are nesting or hatching, access to the Ostional beach is strictly controlled.  You must access the beach with a tour guide and will be given a wrist band.  The entry fee is $6 USD.  A tip for the guide is always greatly appreciated.  The guide will lead you to the beach and the best areas to observe while also protecting the turtles and eggs.  Most speak English and will answer any questions that you have.

Our Trips to See the Turtles in Costa Rica

We made two trips, one in September to see the hatching and the other in October to watch them lay eggs.  Both times we left well before sunrise and arrived between 6 and 6:30 am.  Traveling in the morning greatly reduces the chances of running into heavy rains as most storms occur in the afternoon and early evening.  The exception is when the weather is affected by a tropical storm or nearby hurricane.  During these storms, all day wash outs are common and travel to Ostional is nearly impossible.  For more details on the weather in Costa Rica, please visit our Costa Rica Weather page.

An absolutely amazing experience is how I would describe it.  Groups of tiny turtles appear out of a small hole in the sand.  They struggle to climb out and reach flat land often stepping over and pushing others back down into the hole.  There can be as many as 50-60 in one hole. 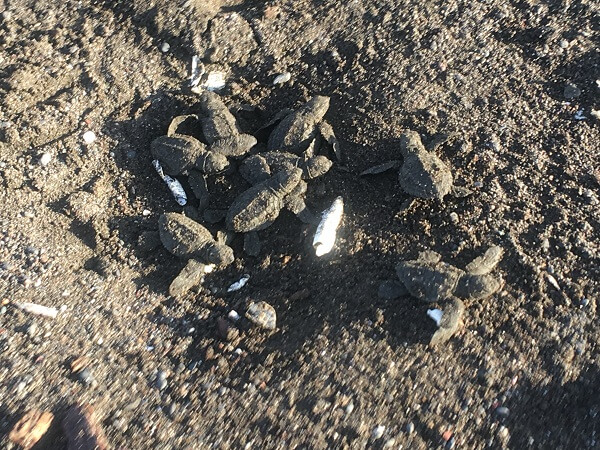 Olive Ridleys Climbing out of the Nest

Once they emerge they take a short pause, and then most of them start spinning in a circle to set their "internal GPS" that they will use later in life when they return to this exact same location to lay their eggs.

Once the GPS is set, they start to make the long and slow journey to the ocean.  The trip builds their lung capacity and strength and is one of the necessary steps in order to survive.  If a person were to pick a turtle up, walk it down to the beach and release it into the ocean, it will die because it is not strong enough yet. 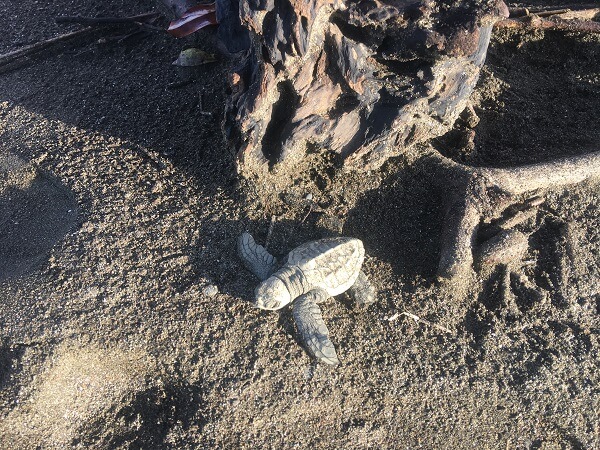 During the trip to the ocean there are birds and vultures lining the area just waiting for the soft shelled baby turtles to be exposed.  Once in the ocean they risk being eaten by fish.  Only about 1% of all baby turtles actually survive. 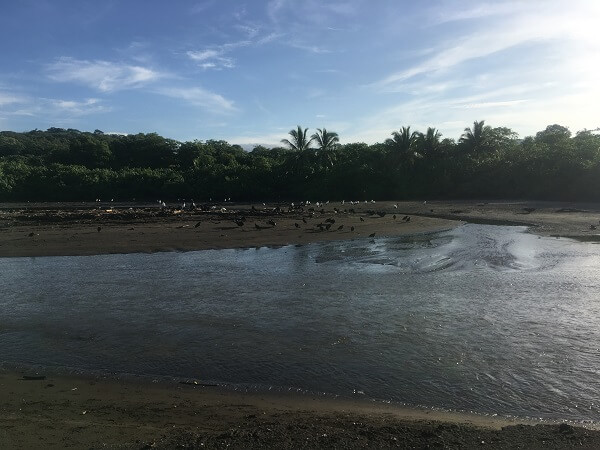 Vultures and Birds Waiting for the Turtles

We just missed thousands of turtles on the beach at the same time by less then 12 hours.  However, there were still a few hundred scattered over a half a mile or so. 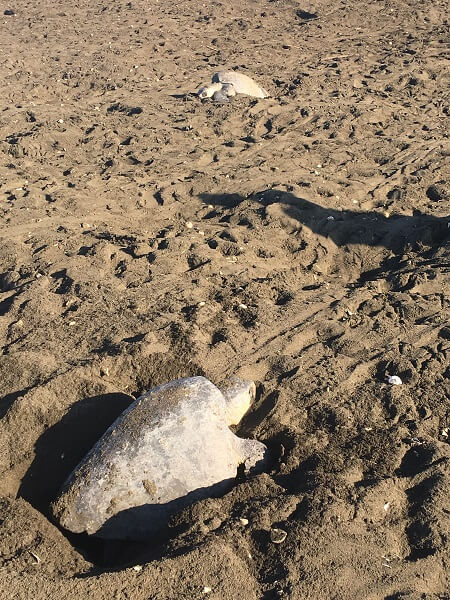 Each turtle travels high up the sand at low tide and digs a deep hole. 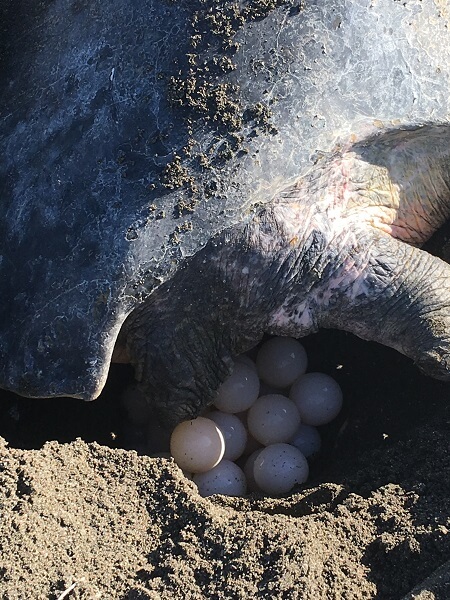 Just prior to laying eggs, the Olive Ridley completely stops moving and goes into a what appears to be a trance.  Eggs start to appear every few minutes.  Once done, they use their flippers to cover up the eggs and rotate their body up into the air and then thump down on the sand to pack it down.  They repeat this about two dozen times or until they feel that their eggs are safe and well hidden. 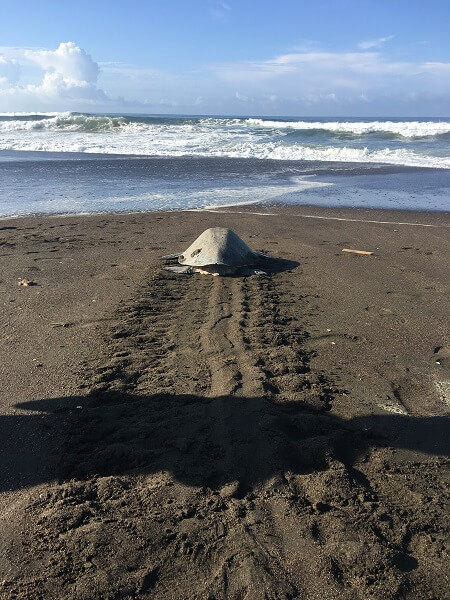 Olive Ridley Returns to the Ocean

Once done, they rest and make the long journey back to the ocean.  The closure to the ocean they get, the faster they move.  Once there, the returning wave water will grab them and pull them out to deeper water where they can swim. 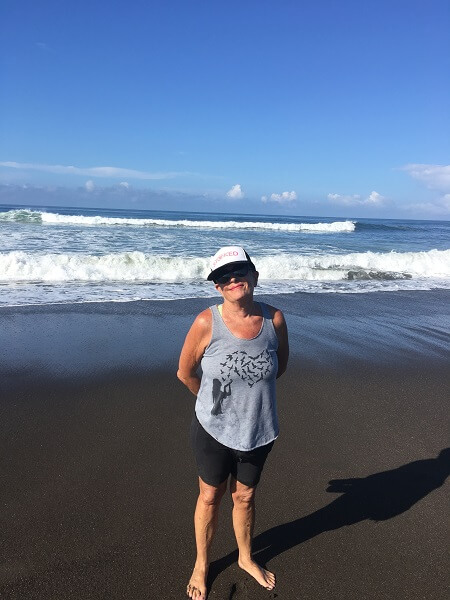 Smile Says it All

The end of a fun day seeing the Olive Ridley turtles in Costa Rica.