The official Costa Rica money is called the Colon (pronounced ko-lone) and the plural is Colones, (ko-lo-nays).  The first thing that you will notice are the vibrant colors, varying sizes and tribute to both important people and nature. 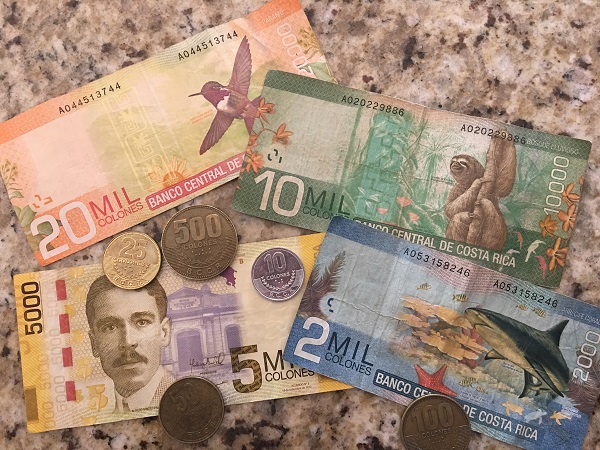 In July of 2019 the ratio of colones to the USD was 575 to 1, a little less than three years later it is 640 to 1, an improvement of 11% if your bill is converted from colones to USD.  For those living in Costa Rica on Social Security from the United States, taking this into consideration plus the annual COLA (cost of living adjustments for the last three years), equates to about a 20% advantage.  Inflation in Costa Rica has not been anywhere near what it has been in the United States.  However, all of this can work the other way also.

For more details on the colon and history, Wikipedia has a great write up.

Costa Rica has started withdrawing the older paper money, printed on cotton, from circulation and replacing it with new bills printed on polymer plastic with a small transparent window.  Once a denomination has been withdrawn, it can no longer be used.  For those that have older style bills that have expired, they can be exchanged at a bank for the new style.  Below is the list on when different denominations will no longer be valid.

The new style bills are being introduced for improved durability and thus a longer life span plus it reduces the chances of counterfeit.

Note:  If you are in the United States and request Colones from a bank prior to traveling to Costa Rica, there is a very good chance that you will receive the old style bill that is no longer valid.  If this happens, upon arrival, you will have to go to the bank to exchange.  In Costa Rica, banking is not the best way to spend part of your day, trust me.  Check with you bank before ordering. 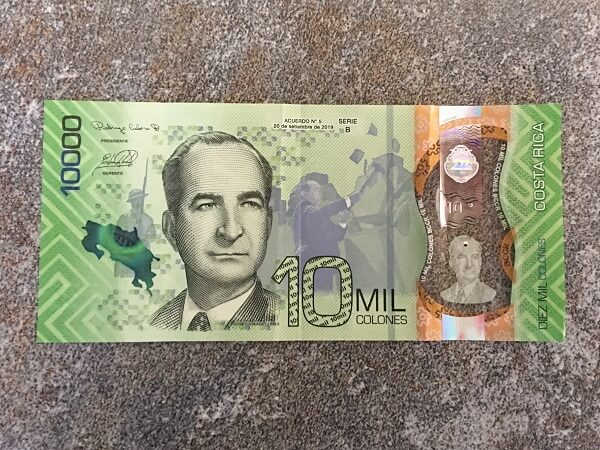 The US Dollar in Costa Rica

The US dollar is widely accepted in Costa Rica, however, only certain denominations can generally be used.  The $20 bill is preferred and you may have to go to the bank to break $50 and $100 bills.  Important - Only the new style $100 US bills are accepted.   Bills cannot have any tears, markings or be overly worn, no matter how minor.  They won't be accepted.

We tried to use a $1 bill at a McDonalds and they would not accept anything less than $5.  If you use US money, you will most likely receive change in Colones.  The exchange rate is generally pretty fair but you will do better just using Colones everywhere.

For most tourist activities and restaurants in touristy locations, such as Tamarindo, Jaco and Coco, you will find some prices quoted in US dollars.  If this is the case, it is best to pay with USD cash or credit card processed in US dollars.  If you convert, you risk getting an unfavorable exchange rate, often times by someone doing quick math in their head.

If prices are quoted in Colones, it is best of pay with Colones, cash or credit card.  Important - Specifically ask that your credit card be processed in Colones.  If you look like you are from the US, the vendor may decide to charge you in US dollars, at their exchange rate, thus pocketing a few percentage more.  You will always get the best conversion rate by your credit card company.

Do not exchange money at the Liberia or San Jose airport.  While they will tell you that they don't charge a fee, the exchange rate will be very unfavorable, which in essence is their fee.  During our first trip to Costa Rica, when the Colon was valued at about 590 colones to the US dollar, the exchange rate at the San Jose airport was 490 colones, which means they are profiting by 17%.

Instead, go to a local ATM.  While you may be charged a service fee of $3 to $4 USD, you will get the current exchange rate.  I went to a Walmart across from the San Jose airport after picking up my rental car.  The ATMs are located inside, and once I got my colones, I went to the register and asked for change in smaller denominations.

Go to one of the major banks to exchange USD into Colones, either Banco National de Costa Rica (BNCR) or Bank of Costa Rica (BCR).  You will need your actual passport as copies are not accepted.  No passport - no exchange.

For those traveling from other countries such as Canada, convert to USD before leaving home.  For Canadians, this will most likely come as a shock due to the unfavorable US/Canada exchange rate but there is really nothing you can do about it.  For example, today, 100 Canadian dollars you will get about $75 USD.  Converting to Colones will yield about 48,000 or a net ratio of 480 colones to the Canadian dollar versus 640 colones to the US dollar, a 25% loss.

If you plan on driving, you should carry some colones (bills and coins) before getting away from the airport, especially in the San Jose area.  Depending on where you travel, you may run across some toll roads.  Highway 27 which takes you west from the San Jose airport through the port city of Caldera is a toll road with several toll plazas along the way.  Make sure you have several 100 and 500 colon coins and 1,000 bills and it will make your life easier at the toll booth.

Visa is by far the most widely accepted credit card followed by American Express and Mastercard.  Some vendors will add a small fee if you use a credit card but I have found this to be rare.  Again, if the bill is in Colones, ask for the charge to be in Colones.  Same for the US dollar.

Debit cards will work, but I strongly recommend that you do not use them.  If the charge is incorrect, you will not have any recourse.  I have read about several cases where the amount due was 5000 colones and the vendor charged 5000 USD.

ATMs are widely available and we have not experienced any problems with them.  In most cases, you will be charged a service fee that could range from $3 to $5 USD.  Some US financial institutions, such as Charles Schwab, will reimburse any ATM fees accrued.

Sometimes the ATM transactions that get processed back to your financial institution will be processed as one lump sum and not specify withdrawal amount and fee separately.  Make sure you check with your bank as they may have to manually process any credit.  This has happened to us several times.

Just like in the US, it is best to use an ATM that is inside a bank.  Most banks in Costa Rica have a ATM room that is separate from the main entrance.  Second choice would be inside a store, like a Walmart.  Last choice would be an ATM in an outside public location.  These are more susceptible to the use of skimmers in attempt to steal your information.

Some ATM machines will have the option to disburse US dollars, but not all do.

Some ATMs will recognize that your card is from a US financial institution and give you the option of an English menu, but not all will.

Be prepared if you are not fluent in Spanish.  Have Google translate ready to go just in case.

The two preferred banks in Costa Rica are Banco National de Costa Rica (BNCR) and Bank of Costa Rica (BCR).  From talking to others that have lived down here for a while, BCR's online banking is far superior to BNCR so we opened an account at BCR.

Upon entering a bank you cannot wear hats or sunglasses.

Once inside, at some banks such as BCR, there  is an automated ticket dispenser where you will need to select the transaction type (all in Spanish).  If you need to visit a teller, select "Caja".  If you need to open an account then visit the "platforma".  Take a number and wait to be called.

For Costa Rica money exchanges, the wait can be just a few minutes or sometimes 30-45 minutes.  For opening an account, the wait can be much longer, sometimes over an hour.  For us to open a basic account, we waited about 45 minutes but it took another hour plus to complete the process.

Avoid Monday mornings, weekdays before or after a holiday and Friday afternoons.  Holidays can sneak up on you in Costa Rica such as Guanacaste day in July.

You must have your passport and a Costa Rica phone number to open up an account.  Strike one for us....we waited 45 minutes to be seen and immediately found out about the Costa Rica phone requirement.  We visited the Kolbi store and were back in a few days to complete the process.

At BCR, non-residents are not allowed to open up a bank account unless you have applied for residency and your application has been accepted for processing.  You will need a letter from your attorney.  Our immigration attorney gave us a formal letter with all of the information that we needed regarding our Residency status.

As a non-resident, Deposits are limited to $1,500 USD per month but limits are calculated on an annual basis.  In other words, I can deposit $18,000 USD (12 x $1,500) all at once, but won't be allowed additional deposits for the remainder of the year.

Wire transfers into bank accounts are not allowed until Residency is obtained.

This is where the inconsistencies of the Costa Rican banking system start to show up.  We have friends that have both deposited and wire transferred money far greater than the limits above, even without Residency.  However, all have been contacted at a later time, sometimes months or years later, and required to declare the origin of the money and how it was earned.  For some, this has been a painful process.  If you don't comply, your account will be closed and you will be banned from having an account at that bank forever.  With so few highly recommended banks available, this is not something that you want to have happen.

You have to ask for an ATM card, they don't just happen as a standard process.  ATM cards are processed in the bank and takes 3-4 days to be ready.  ATM cards are not mailed.  You must pick them up in person.  This means waiting in line again for the new accounts person.  Plan on at least an hour, probably more.

Online access, at least for BCR, comes with a BINGO card.  This is a card with labeled rows and columns such at A-4 and D-3.  Each cell contains a number.  Every time you log in, you will be prompted to enter the number from three different cells.  Simple, but what a great security measure !

When it comes to money and banking, as with many other things in Costa Rica, use this information as a guideline so that you are as well prepared as possible, but your results may vary.  Pura Vida :)

I use a great App that provides real time currency exchange rates plus it has the ability for you to easily input a price in one currency and determine the real time value in another currency.  It is called the XE Currency App.  Below is what it looks like on an iPhone. 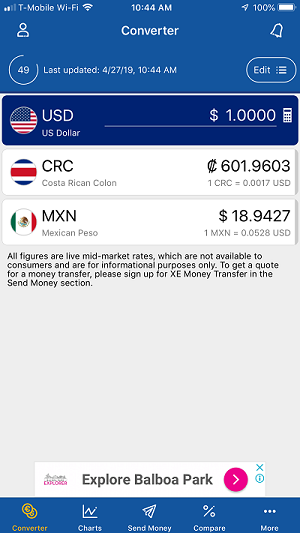