Costa Rica weather is unlike anywhere else in the world.  A very small country, about the size of West Virginia, bordered by the Caribbean on the east and the Pacific ocean on the west with tall volcanic mountain ranges in between, creating diverse micro-climates throughout the country. 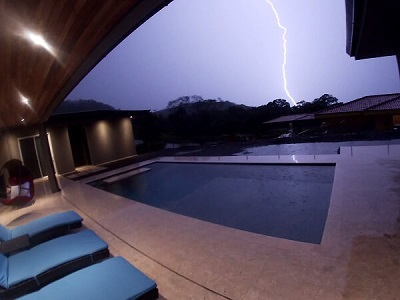 Most of Costa Rica is defined by two seasons, wet or "green" season and dry or "brown" season.  Except for the Caribbean coast, most of the rain falls from the middle of May to the middle of November.  With the exception of the Caribbean side, December through April has significantly less rain, especially in the more arid Pacific Northwest province of Guanacaste where half of the year is a luscious, almost fluorescent green, and the other half is completely dry.

The Pacific Northwest gets about 60 inches of rain a year but over 20 inches falls in September and October combined.  The Caribbean side gets about 125 inches per year but it is spread out more evenly throughout the months.  The Central valley falls somewhere in between.  When it is the rainiest on the Pacific side during September and October, the Caribbean side has the least amount of rain and most sunshine making this a popular time to visit some of the small Caribbean towns.

The Pacific side is now full dry mode and getting warmer.  No rain for the north Pacific regions west of the mountains plus the strong, dry Papagayo winds, are starting to blow.  The southern Pacific regions towards Panama are also much drier in January but will still receive enough rain to keep everything green.  The Central Valley is pleasant with just enough rain to make it comfortable.  The Caribbean side remains  humid and wet averaging about 10 inches of rain, however, there will still be some beautiful days.

The Papagayo winds continue to strengthen in the Pacific northwest and the chance of rain is near zero percent.  This vegetation is turning brown, and with the exception of a few types of trees, nothing is green.  The southern Pacific is hot and humid with some rain.  The Central valley remains comfortable with just enough rain to keep it beautiful.  Heavy downpours are rare at this time of the year.  The Caribbean side sees less rain this month than January but heavy downpours still occur.

Dry season peaks this month and the Pacific northwest is nearly completely brown.  The sugar cane fields start to be burned adding smoke and ash into the air.  Wildfires are common.  Temperatures continue to increase and the weather is hot and dry.  The Papagayo winds continue to blow strong.  Rarely does this area get any rain during March.  The southern Pacific remains sunny, hot and humid with some rain.  The Central Valley has some rain but not overwhelming and the temperatures are pleasant.  The Caribbean weather is about like February, warm, humid with occasional downpours.

Dry season is nearly over in the Pacific northwest.  The Papagayo winds start to subside.  Rain chances increase especially towards the end of the month.  The humidity starts to increase and so do the temperatures.  The overall weather starts to become somewhat unpleasant at times and very hot.  The Southern Pacific remains hot, humid with rain chances increasing as the month progresses.  The Central Valley starts to see a little more rain but still temperatures remain comfortable.  Moderate rain continues in the Caribbean with very warm and humid conditions.

Rainy season officially starts in May.  This is the worst month in the Pacific northwest in terms of temperature, humidity and overall comfort.  The Papagayo winds are gone, the air is generally calm and has no cooling effect.  The good news here is that almost overnight, this regions pops from all brown to all green.  It is amazing.  Heavier rain reaches the southern Pacific and the weather is very hot and humid.  The Central Valley also starts to see more rain but temperatures remain comfortable.  Rain also increases in the Caribbean side and this area remains hot and humid.

Rainy season is in full swing over most of the country.  In all areas except the Caribbean coast, days usually start out sunny and as the day progresses, the clouds build and there is afternoon rain.  By sunset, the rain is usually over.

Something weird happens in July.  For the entire Pacific coast, the first two weeks of July usually brings little rain, lower humidity, lots of sunshine and pleasant breezes.  This phenomena is caused by Sahara dust storms that blow dust particles from South Africa, into the atmosphere and towards the Caribbean Sea which inhibits storms.  July is the rainiest month of the year on the Caribbean side with over 17 inches.  The Central valley remains pleasant and often rainy but also experiences less rain in early July.

Rainy season really starts to kick into full gear in August.  The possibility of getting influenced by a tropical storm or hurricane is far greater in August than any other month.  On the Pacific coast there still will be sunny mornings with afternoon storms but the chance of getting rain earlier in the day increases.  Torrential downpours are common and can last much longer than previous months.  There will also be lots of rain in the Central Valley.  It continues to be rainy, warm and humid on the Caribbean side.

For the Pacific coast and Central Valley, September is the second rainiest month of the year.  All day rains are much more common and storms can be intense with rainfall amount rates of 6 inches per hour.  However, the Caribbean side starts to move into some of the best weather of the year.  Rainfall rates decrease significantly and sunshine is much more prevalent.  The influence of hurricanes still remain a threat.

With the exception of the Caribbean coast, where this is the best weather month of the year with much less rain and more sunshine, the remainder of Costa Rica will see heavy rain often lasting for days.  In general, the days with sunshine in the morning with storms limited to the afternoons, does not happen.  This is the rainiest month in Costa Rica.  It is also one of the coolest months of the year.  The influence of hurricanes still remain a threat but the end of the season is near.

The first half of November will continue to be beautiful on the Caribbean side similar to October but rainfall amounts start to increase dramatically towards the end of the month.  The weather can still be rainy in the remainder of the country, but the general trend, as the month progresses in the Central Valley and Pacific coasts, is that the rain will diminish greatly.  For the Pacific northwest, this occurs like a switch.  One day you wake up to beautiful sunshine and it stays that way until April.  For the remainder of the Pacific coast, the weather conditions also improve but not as fast as in the northwest.  Temperatures are very pleasant, the entire country is lush green.  This is my favorite month of the year.  The threat of hurricanes near Costa Rica starts to subside in November and few storms have influenced the country once this month is over.

This month is absolutely gorgeous for those in the Central Valley and Pacific coasts.  Temperatures are pleasant with abundant sunshine and the Papagayo winds of the Pacific northwest have not arrived yet.  The countryside remains stunning and is painted in a vivid green.  Heavy rainfall and less sunshine return to the Caribbean side and December is the second rainiest month of the year here. 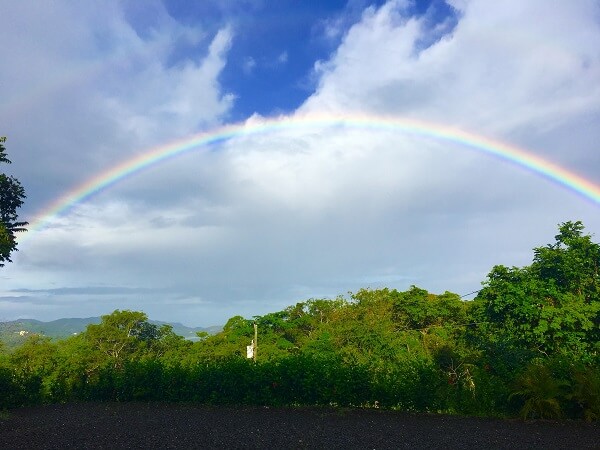 In the beach communities of the Pacific Northwest such as Potrero, Coco, Playa Flamingo and Tamarindo, the average high is 91 and average low is 71.

April and May, when combined with humidity,  are the most uncomfortable months.

The weather in the months of June through August generally start out sunny.  Clouds then build throughout the afternoon and everyday usually has some rain through early evening.  Something happens in July and it is almost like a second summer.  The rain subsides somewhat and there is often more sun as compared to other months in the rainy season.

It is extremely windy from January through April, sometimes reaching near hurricane force, especially at night.  To the contrary, there is hardly any wind from May through December. 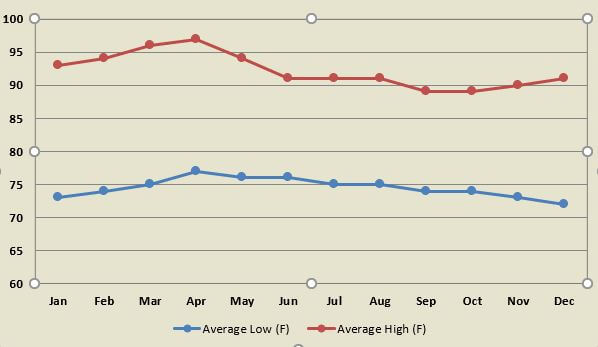 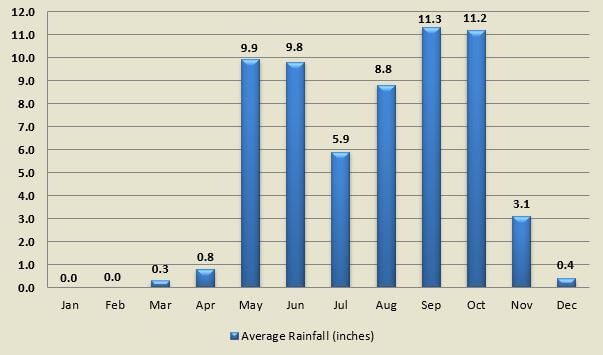 San Jose and the surrounding suburbs are at an elevation between 3000 and 3500 feet.  Therefore it is much cooler than the Pacific Northwest beach communities.  This area also receives a little more rainfall because of the proximity to the western facing mountain slopes that squeezes more rain out of the atmosphere.  Many people who live in this area don't require air conditioning or heating. 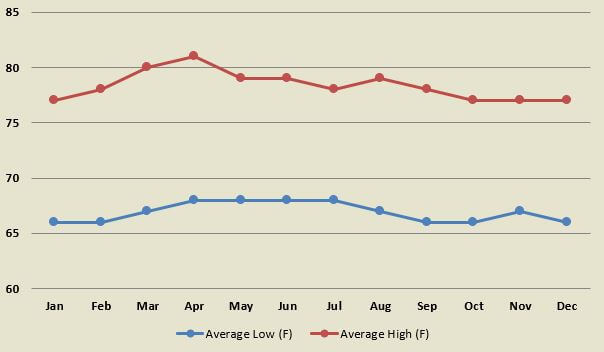 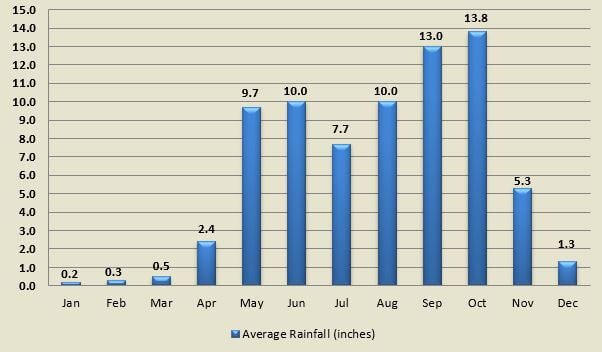 Limon is located right on the Caribbean and it pretty warm and humid all year long, but still not has hot as the Pacific northwest beach towns.  Rainfall is more evenly distributed over the entire year.  The Caribbean side has historically been more susceptible to tropical storms and hurricanes as they begin to form.

The two best weather months on the Caribbean side are September and October, which is contrary to the Pacific coast where this is the rainiest two months of the year. 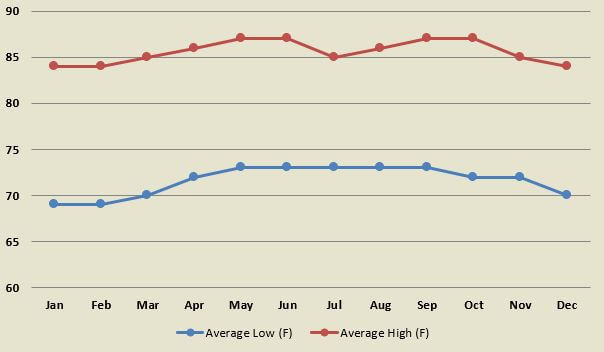 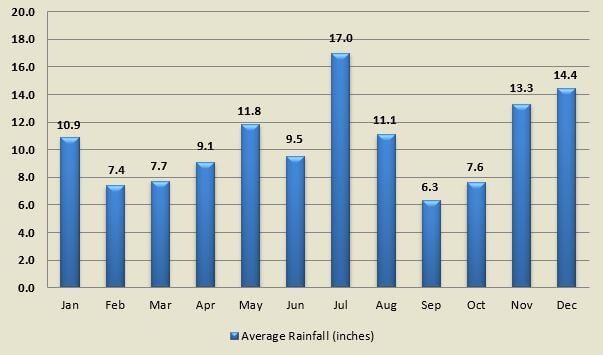 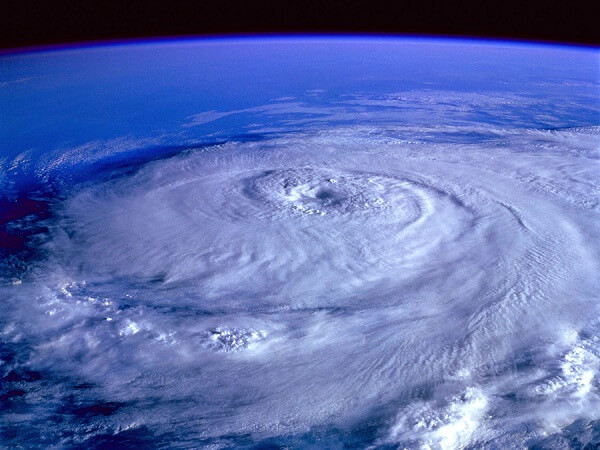 Costa Rica is located between 8 and 10 degrees latitude which is generally non-conducive to the sustainability of hurricanes  because of the Coreolis effect that tempers the rotational energy that a hurricane needs to form.  However, Costa Rica is right on the line and storms often start to form offshore of the northern part of the country and then either move west or north.

Nicaragua, located to the north of Costa Rica, often takes the direct impact of hurricanes and the difference is usually only 100-200 miles.  When this happens, Costa Rica can receive extremely heavy rainfall but little wind.  The results are often severe flooding and mudslides in all of Costa Rica as energy is drawn from the inter-tropical convergence zone located between Costa Rica and Panama.

Rarely do hurricanes cross over from the Caribbean side to the Pacific side but it happened in October of 2016 when hurricane Otto made the trip along the Costa Rica/Nicaragua border.  This was the first such occurrence since records began 1851.

Hurricane Nate in 2017 was offshore of Costa Rica and Nicaragua in the Caribbean and moving north but still resulted in massive flooding and some deaths in Costa Rica.

In summary, hurricanes and strong winds historically have not hit Costa Rica directly but even the proximity of these storms that are close by can still cause large amounts of rainfall, mudslides, flooding and result in deaths and massive destruction.

Wikipedia has a great historical summary of hurricanes in Costa Rica.