Costa Rica is located in Central America and borders Nicaragua to the north, Panama to the south, the Caribbean Sea to the East and the Pacific Ocean to the West.  Contrary to what some believe, Costa Rica is not a island.

At about 20,000 square miles, Costa Rica is smaller than the state of West Virginia (24,000) miles and home to about 5 million people.  The highest concentration being in San Jose and surrounding suburbs, which is located in the central part of the country. The three main cities are the Capital of San Jose, Limon on the Caribbean side and Liberia on the Pacific Northwest side.

Costa Rica has a very stable democracy and law is applied and enforced equally across all 7 of its provinces.  Unlike the United States, where individual states can make many of their own decisions and not abide by Federal direction, Costa Rica is one country and executes in unity.

Costa Rica is one of the most unique regions in the world.  A mountain range in the central of the country that runs north to south consists of 6 active volcanoes and 55 inactive ones, the tallest one rising to 11,260 feet.  This creates numerous extreme micro-climates from tropical rain forests to desert like areas that receive little, if any rain for six months out of the year, and there are endless climates in between.

Costa Rica is part of the "ring of fire" and earthquakes are common.

Due to the proximity to the equator, and lack of the Coriolis Effect, which tempers the formation of hurricanes, Costa Rica is not as susceptible to these storms as its neighbors to the north.  However, occasionally a tropical storm or hurricane will form near Costa Rica and move north, sometimes impacting the region.

The driest and sunniest part of Costa Rica are the Pacific ocean beach communities of Coco, Flamingo and Tamarindo located in the Guanacaste province.  Rainfall here averages about 60 inches a year which mostly comes between mid May and mid November with 30 inches alone in September and October combined.  This area also receives the most sunshine, averaging about 80% throughout the year.  The months of December to April have almost no clouds at all.  The Guanacaste province also has the most wind in the months of January through April, sometimes reaching hurricane force.  These winds are known as the Papagayo winds because they blow from Nicaragua and the gulf of Papagayo form the northeast to the southwest and over the beach towns of the Pacific.

The Caribbean beach town of Limon receives about 120 inches of rain and about 50 percent of the time has sunshine.  The rainfall in Limon is more evenly distributed throughout the year, and contrary to Guanacaste, has the least amount of rain in September and October.

The mountain regions in between the Pacific and Caribbean oceans receive up to 30 feet of rain annually and are generally cloudy most of the time, although there will be some beautiful sunshine at times.

Costa Rica has 28 National Parks, the first of which opened in 1955.  It also has numerous protected wildlife and fauna preserves.

25% of Costa Rica is protected.

Here is Wikipedia link to all of Costa Rica's national parks.

Over 99% of the electricity consumed in Costa Rica is generated by wind, solar or hydro-electric.

There is virtually no air pollution or smog.

Costa Rica is among the world leader in the use of pesticides, although recent awareness and efforts to farm more sustainably are being implemented and the situation is improving.

The main exports of Costa Rica are electronic components, medical equipment, coffee, pineapple and bananas and represents about 40 percent of the nation's Gross Domestic Product (GDP).  The main consumer of these exports is the United States.

Costa Rica has become one of the top travel destinations in the world.  Annual income from tourism totals about $8 billion US dollars and account for about 13% of the nations GDP.

While Costa Rica has numerous small airports, some with just dirt runways, the two major airports that serve the international traveler are San Jose's San Juan Santamaria (SJO) and the Daniel Oduber (LIR) located in Liberia.

Travel times by air from Los Angeles and Toronto are about 5.5 hours each, 3.5 hours from Houston and 2.5 hours from Miami. 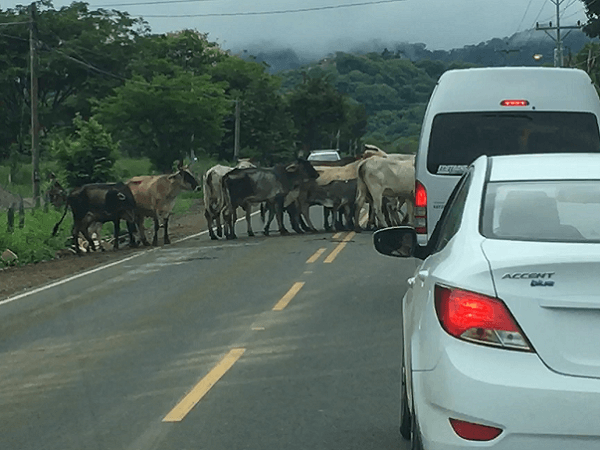